The first day of LBJ - NBIH

The day that John F. Kennedy was assassinated vice-president Lyndon B. Johnson took over office. At New Books in History Marshall Poe spoke with Steve Gillon, who wrote a book titled The Kennedy Assassination--24 Hours After, but while Kennedy and his assassination are subject of the title, Johnson makes the subheading and for the actual subject of the book: Lyndon B. Johnson's Pivotal First Day as President.

What is both astounding and at the same time completely expectable is the utter confusion around LBJ's succession of JFK. Astounding it is, because Kennedy was not the first president to be murdered and Johnson was not the first vice-president who had had to suddenly step in. Also, the US never have had serious succession contention. Nevertheless, the assassination struck like lightning on a bright day and shook the nation just as much as all the leading individuals, making for the most humanly confusion.

What adds to the picture and makes for the juicy story Gillon has to tell: the president's brother, Robert Kennedy had a disliking of Johnson and seemed to be scheming against the succession. Or at least, Johnson was sufficiently suspicious of the Kennedy clan and schemed, in his turn, to pull in the transition of power and stage it such that it would look swift and smooth. Poe allows Gillon to spell the story out and it makes for a riveting podcast. I wonder how much drama is left for the readers of the book.

A reader of the blog left a very valuable comment at the report a podcast section. He alerted us to a podcast lecture series in political science: Political Economic and Social Thought by Professor Charles Anderson at the University of Wisconsin which was recorded in the early 1980's (feed). This course consists of a full year worth of lectures as it comprises two consecutive courses over two semesters which could also be taken as one.

We occasionally see podcast lecture series that contain recordings from a more distant past. (I recall an Oxford podcast with recordings of Isaiah Berlin from the 1950's.) One must always wonder what special reason there could be to listen to those old recordings. What added value would it have to follow an introductory course to political science from 25 years ago, when you can take a contemporary one in stead? And so I have begun to listen looking for an answer to this question. 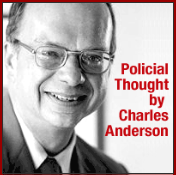 The method and substance of the course seems not very different from today, nor is the lecturer's language (as opposed to Isaiah Berlin's). And if Anderson uses president Reagan as an example, you could replace his name with Obama and have the same outcome. So, despite a difference of 25 years, the course is very similar and while this means it is not outdated, it also makes the question more compelling: why take an old course if you can take a new one?

I would say, based on the first lectures, it is very fascinating to see the much more subtle differences. I am not sure whether everybody will hear this, but I was struck by nuances in Anderson's general statements. It seemed to me that relativism, though he tries to neutralize it a bit, nevertheless plays a more dominant role in his frame of reference than it would today. Also, in the dichotomy of nature and nurture, nurture seems much less challenged in his line of thought. And last but not least, he displays a kind of monism in his treatment of modern Western culture. He plainly states our society started in Greece. He brushes other influences to the side, even Judaism. I think today we take our history much less segmented and take our culture to be a product not just of classical tradition, but also of a Judeo-Christian tradition, with a variety of additional influences.

Especially if you care to take comparisons, it can be extremely interesting to take this old course. Also, if you regret the loss of classic approach.