Just when I thought I had found a charming new podcast, it looks as if this one has been faded. It turns out to be rather hard to find podcasts that delve into the middle ages and the two that did quite a good job have not seen new episodes for a long time.

My latest find in this respect is Ancient and Medieval history podcast, which has produced 7 charming episodes with befitting music, travel tips (accounts of relevant excursions the hosts did themselves) and more. I especially liked the issues about Robin Hood (Robyn Hode), Charlemagne and Beowulf. I never knew about the roots of Robin Hood and was enthralled to be introduced in the attempted reconstructions. Similarly, with Beowulf, I had some idea of the story, but much appreciated the analysis of the Christian versus the non-Christian elements. And the revelation J.R.R. Tolkien was involved in the research as a scholar - it showed! In Charlemagne, the show didn't bring much news, just the stories bringing me back to history classes in elementary school.

An early find is an even older one, the Medieval Podcast, with very promising installments about the early history of Britain and about monasticism. It is great these episodes can still be downloaded, but such a pity there isn't more. This is a real niche in history podcasts.
Posted by Unknown at 17:11 4 comments

Dan Carlin on the Apaches 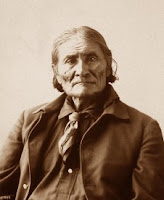 The Apache were the last native Americans to surrender to the US government. Packed up in their reserves, their story wasn't heard until Eve Ball came along. Dan Carlin's hardcore history's last episode was inspired by Eve Ball's book and other sources about the struggle between the Apache, the Mexicans and the Americans. Dan takes us on his train of thought in a an exceptionally long issue of the podcast.

Dan does what few history podcasts dare to take on: analyze the facts and engage in thoughts on the meaning and implication of history. There is much to say and think around the sad history of the fading Indian Nation in front of the ongoing European expansion into their habitat. On this lost battle the Apaches took on the battle with horrifying means, but Dan shows how one man's terrorist is the other's freedom fighter. And he does more, he depicts the crucial incident where the Apache and the new Americans hit it off to a bad start and a violent struggle, triggered by misunderstanding.

I am not sure whether Dan believes this incident could have been prevented. In my ears the culture clash sounded like an accident waiting to happen. The interests of both sides were pitted and the understanding was minimal. In any case Dan leaves room for the listener to draw his own conclusions, his job is well done, by taking us on his own thought trip and making us think along. This podcast shows him at his best and I know from reactions to my blog this is a very popular podcast that stands out among history podcasts for many listeners, including those that have an average interest in history. Therefore a very warm recommendation, not just from Anne is a Man!