Anne is a Frisian name for men. The Frisian language is still spoken in the north of the Netherlands and that is where my grandfather came from after whom I was named. Myself, I was born in the east of the country, in a small village with a narrow horizon. The story of my blog is the story of a broadening horizon. 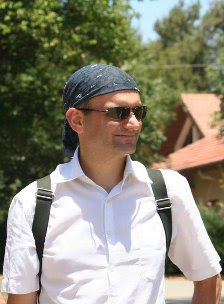 In 1984 I moved to Amsterdam in order to study Law, which soon I enriched with studying some sociology and psychology on the side. Eventually I turned to the philosophy of Law, but failed to finish my PhD. What I did next was rediscover computers. Before 1984, I had done some basic programming on the one computer we had in high school. While engaging in Law, my only work on computer was word processing, but in the late nineties I took up programming again, C++ and Java.

In 1998 I got married and moved with my wife to Israel. I continued to work in computers, but on the side I kept my other interests alive. I made a study of the history of Israel, which fitted neatly on to my previous spare time studies into the history of World War I. I also scoured the internet for good content in Dutch - keeping in touch with my origin.

While looking for Dutch audio, I discovered podcasts. When investigating the iTunes directories, I soon discovered the history and science podcasts I came to like so much. Among the first were Berkeley's History 5, Shrink Rap Radio and the Dutch podcast Simek 's Nachts. After many months of listening, I began this blog and dedicated it to reviewing the majority of podcasts I find.