Sometimes philosophers, culture bearers and educators make this assumption explicit: that there is progress in history. That the herders were better off than the hunter gatherers, the farmers better off than the herders and that urbanized society is basically a kind of evolutionary pinnacle. Implicitly, this belief is very strongly embedded in our view of the world. Yet, there has always been a counter position as well. Philosophy Bites pays attention to one philosopher of this nostalgia or this critique of civilization: Jean-Jacques Rousseau. 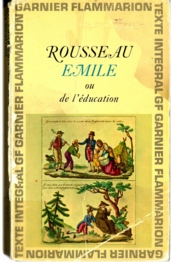 Hosts Nigel Warburton and David Edmonds invited Melissa Lane to speak on Rousseau in last week's issue of their podcast. He thinks our psychology and morals have been corrupted by civilization, because of both a dependence of others and a competition with others, not just materially, but also in pride, esteem and such. Once man is engaged in dealing with this dependence and competition, he loses his inner autarkic quality and his pure strive for personal survival deteriorates in an unbounded necessity for expansion. He did not idealize the toughness of the state of nature, but he deplores the unhealthy, unnatural development.

Even though we persist to think in terms of the superiority of civilization and persist to believe in progress, critics such as Rousseau have a profound effect and we see this return in thinkers such as Marx and Freud and in lines of thought in Feminism, Ecologism, Conservatism and on and on.