As usual, Marshall Poe did a fascinating interview at New Books In History and it reminded me of two old university lecture series from Stanford you can still get on iTunes. Guest on the show was Charles King to speak about his book The Ghost of Freedom which attempts to tackle the history of the Caucasus.

Poe lets King explain how intricate and unusual it is to write a history book that focuses on a geographically defined place and a large one at that. Also, the Caucasus is an area with a complicated history torn between many different ethnicities and influenced from three very different imperial or cultural spheres: the Turkish, the Russian and the Persian. Besides, this is not a place we are particularly familiar with and so it is even more difficult to find our way in the labyrinth. Here is where the Stanford course lends a helping hand.

Martin Lewis offered two series of enhanced podcasts which also made a stop at the Caucasus. Geography of World Cultures (feed) and Global Geopolitics (feed) which were taught in 2007 and 2008 at Stanford. With the help of maps (added to the enhanced podcast) Lewis dove into the spread of cultures, languages and religions in this mountain range. On top of that, he offered a passage to the geopolitical tensions of the area, and there are not a few. I add the Caucasus map from the series about World Cultures (part of lecture 6). 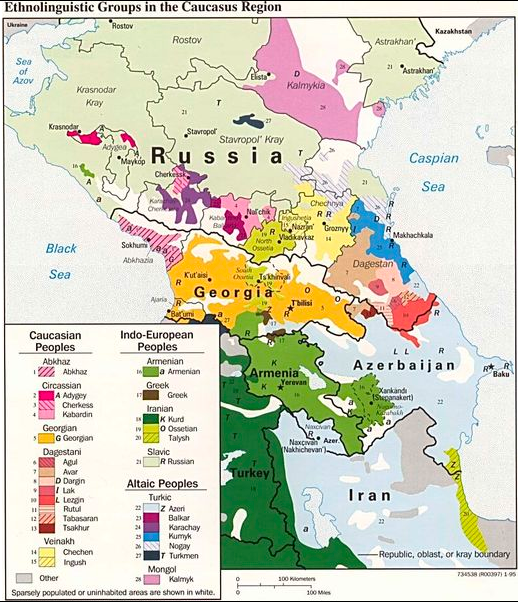 Marshall Poe picks out three dualities from the Caucasus and lets Charles King elaborate upon them. These are relationships between locals and one of the big neighbors and King describes how they are close and strained of late. Those are the relationships of the Georgians with the Russians, of the Armenians with the Turks and of Azerbaijan with Iran.

More NBIH:
The genocide and the trial,
Nation and Culture,
Three New Books In History,
The fourth part of the world,
How the Soviet system imploded.