Over the Ramadan, Speaking of Faith has spent a lot of time on talking Islam and the Ramadan in particular. I wanted to pick at least some issue from that long series, but didn't find the time. Only now, I have returned once more to this good podcast (feed) and found an interview with David Treuer about language and meaning. 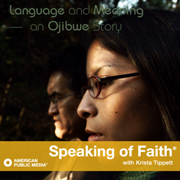 The thoughts on language and meaning are applied to the native American language Ojibwe. Although Treuer had to acquire Ojibwe at a later age, it is fundamentally a language he needs to express meaning, especially related to the culture, identity and life of him as an Ojibwe Indian. Together with his brother Anton, he is involved in a project preserving this language. His stories on the show are about the special qualities of the language and the specifics they express, fro him and for his study subjects. The conversation holds that it takes the Ojibwe language, to capture certain meanings and that English cannot do that.

Therefore, it is a plea for the conservation of specific language, native American and otherwise, although many of them are in danger of extinction. Treuer, in this, is the representative of the Ojibwe, but already while listening, I wondered how an Indian and his brother can have such German sounding names. And it turns out that they are the sons of a holocaust survivor from Austria. That aspect is no touched upon during the program, but can be found in the uncut version of Krista Tippett's interview with David Treuer (mp3 download).

More Speaking of Faith:
The story and God,
Fragility and Humanity,
The Sunni-Shia divide and the future of Islam,
Wangari Maathai,
Rumi.
Posted by Unknown at 06:00 0 comments