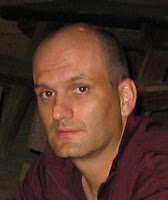 Ever since Friday the 12th, I am very occupied with recovering from being rear-ended. Frankly, more suffering than recovering. Lots of back pain, stiffness and constant headache and agony in the neck. I can't sit or stand of lie down for any more than a couple of minutes and then a whole myriad of inconvenient twitches make me move. I have done a round of pain killers and sort of figured out which one works best for me.

So that is where we are at and let's hope from here the fun will subside. What I wanted to share with you all, is what is all about the title of this blog: Anne is a man. I have been going through the mills of health care, insurance and police bureaucracy and invariably the question comes up: who is this Anne, whose form you are bringing with you? Well, that's me! Anne is a man?! Well, yes.

At the x-ray department of the Rabin Medical Center the head operator just wouldn't take my word for it. No, can't be. Anne is a woman and you are not going to be x-rayed. It took her computer assistant, after some time of bickering, to finally enter my ID into the computer system and enlarge the gender box: Anne is a man!
Posted by Unknown at 22:17 0 comments

The tower of Babel

The KMTT podcast has returned to discussing the parashot hashavua (which went out of style around slichot up until after simchat tora). The first parasha is Noach. However, the lecture did not address the story of Noach, but rather a tiny section in the same parasha, the famous story of the tower of Babel. The story has the makings of a sin and its punishment, the question is raised, what exactly was the sin and why this punishment?

The first interpretation is that the city-builders wanted to build their tower in order to defy god. In a way the tower then became a kind of siege tower. They united in order to place themselves over god and god reacted by fundamentally breaking their union, through diversifying their language.

The second interpretation is that by building a city, they created a place to flock together. God's intention with the creation is, however, that man would spread out over the face of the earth. In that sense, the city building and as culminating part of that process the tower building, was not as much a sin, but rather an error. And the reaction of god, to diversify the language, was much less a punishment, than a measure to ensure the spreading out of the peoples.
Posted by Unknown at 08:10 0 comments