Alan Rabinowitz at Speaking of Faith

At APM's Speaking of Faith, three weeks ago, Krista Tippett spoke with Alan Rabinowitz who is a zoologist and wildlife conservationist. The title for the program was: A Voice for the Animals. As such, you would expect a conversation about animal rights and what animals and the biosphere  mean for the world. That would be interesting in itself, but the issue to a whole other turn. (feed) 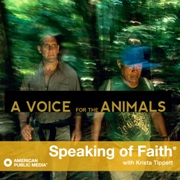 Tippett's conversation with Rabinowitz, concentrated much more on him as a person and the individual challenges he has to overcome in order to achieve what he has been achieving in life. For example, there is his stutter and although having a stutter, certainly as serious as he had it, is quite the handicap, Rabinowitz's life story shows how a challenge can turn into a quality. Having a stutter shut him out socially, but allowed him to bond with animals and develop the skills he needed for his profession. And then, his profession and his bothersome relationship with speech and the social constraints of life, allowed him his insights.

But that is not all, there is also his amazing encounter with the Asian pygmy and by the end of the show, his candid discussion of what it means to have cancer. And in the mean time, he has also touched on the meaning of having children. And so, this show goes beyond the subject of animal rights and if Rabinowitz supplies a voice for the animals, human beings are part of that palette he speaks for - the man with the stutter.