The podcast Media Matters with Bob McChesney is political commentary radio program with (frequently) listeners calling in. The most recent edition had Canadian writer and social critic Naomi Klein in the studio.

Klein gets the opportunity to voice her fierce criticism of modern free market criticism. As already pointed out in her book 'The shock doctrine' which describes what she terms 'Disaster Capitalism' - money making thrives with crises. In her book, the disaster caused by hurricane Katrina is used as an example. In the studio, she goes to show how the current financial disaster works just likewise. A private market crisis is being transformed into a public crisis with all the bail out programs.

What this boils down to is that the capitalists do not have to pay for their mistakes, but manage to pass the hot potato through to the government. That means the tax payer, the public budget and eventually the weakest pay the price. And rich speculators can go on taking huge risks. And thus, capitalism, this unrestrained capitalism, thrives by crises. The excitement and expectations about Obama, have obscured this fact in the US, but in other countries, she claims, the injustice is observed more clearly.

Alexander Herzen according to Isaiah Berlin

Oxford's podcast of the Isaiah Berlin Centenary (Oxford on iTunesU, iTunes feed, site) contains one lecture about Berlin and several lectures by Berlin himself, recorded in the the 1950's. 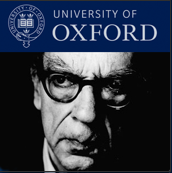 One of the lectures is on a Russian writer, Alexander Herzen, about whom I had never heard, I must admit. Berlin turns out to be a great admirer of Herzen and his lecture on the writer is very fascinating. The importance of Herzen is not necessarily as a writer, although Berlin praises his autobiography as one of the great works in Russian literature. Herzen's meaning lies in his vocation as a publicist and political thinker.

Herzen was, according to Berlin, the first to found a liberal newspaper in Russia and as such a pioneer of free press and free speech. This put him in the position to politically choose between the Russian traditional order, the liberalists and the socialists. Herzen swayed back and forth but between liberals and socialists he kept sitting on the fence. And if this is vieed by some as weakness, Berlin praises this as a strength, just as he finds this a strength in the novelist Turgenev. In Turgenev's Fathers and Sons a similar quality is displayed. That is subject for yet another lecture.