In Our Time
Xenophon
Melvyn Bragg and his guests discuss the life and work of Xenophon. With Paul Cartledge, Edith Hall and Simon Goldhill.
(review, feed) 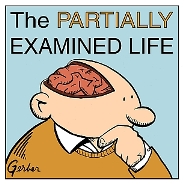 The Partially Examined Life
Bertrand Russell on Math and Logic
Discussing Russell’s Introduction to Mathematical Philosophy (1919), ch. 1-3 and 13-18. How do mathematical concepts like number relate to the real world? Russell wants to derive math from logic, and identifies a number as a set of similar sets of objects, e.g. “3? just IS the set of all trios. Hilarity then ensues. This book is a shortened and much easier to read version of Russell and Whitehead’s much more famous Principia Mathematica, and given that we can’t exactly walk through the specific steps of lots of proofs on a purely audio podcast (nor would we want to put you through that), we spend some of the discussion comparing analytic (with its tendency to over-logicize) and continental (with its tendency towards obscurity) philosophy.
(review, feed)

Here are four recent installments of New Books in History that I enjoyed tremedously and want to recommend in particular. (feed)

The Ottoman and the Russian empire
For ages the Ottoman and the Russian empire had been rival neighbors and within the time span of less than a decade both empires dissolved. Michael Reynolds relates the complex relations between the two empires and describes how the new ideology of nationalism drove the two of them towards a new incarnation. In the process one also gets a better handle on the Armenian genocide.

The problem of order
Isn't it actually quite surprising to what extent there is political order? Modern states can exist by virtue of a very deep and broad, complex social coherence. Francis Fukuyama made a very long ranging study after the historic roots of political order. This is big history as it has become so fashionable of late with the work of Jared Diamond and Ian Morris (to which Fukuyama also refers in the interview).

Why the West?
More big history we get in the interview with Ricardo Duchesne. Like Fukuyama and Diamond and Morris, Duchesne digs broad and deep into world history and his goal: to identify what is unique to the West that made its domination of the last 500 years. And Duchesne comes with a different answer. Slightly different from Diamond and Morris and very different from the Marxist onset, that all is triggered by material circumstance. Duchesne makes an argument to show how Western culture is fundamentally different and allowing for the rapid development of the last 2000 years.

Who is Otto von Bismarck?
Veteran history podcast listeners probably remember (fondly) Professor Margaret Lavinia Anderson who gave us through UC Berkeley two foundational history courses History 5 (Europe from renaissance until today) and History 167b (The Second Reich), Anderson is a specialist in German history and Otto von Bismarck got a fair share in the narrative. Here we alreayd learned how he was larger than life. But how so? For that you have to turn to Marshal Poe's interview with Jonathan Steinberg on New Books In History. It is only a beginning, but there is a disturbing remark Steinberg makes. After he has written his biography of Bismarck, using very unique up close and personal prime resources - he still feels he does not know him.

More New Books in History:
Hans Kundnani about Germany's left after the war,
Ottoman Age of Exploration,
The mysteries of whites and of mass,
A Soviet Memoir,
This I accomplish.
Posted by Unknown at 07:00 0 comments