Speaking of Faith with Krista Tippett (APM)
From Faith to Being (September 9, 2010)
A retrospective show examining how Speaking of Faith has grown into its spacious new name, Being. We hear the voices and stories of our many guests and listeners who have participated in this conversation on faith, meaning, ethics and ideas.
(review, feed)

Distillations
Episode 103: Herbal Remedy
Before pharmaceuticals existed, all medicines had to come from natural sources—like plants. On this week’s show, we focus on such remedies.
(review, feed)

Hebrew Podcasts
Lesson 068 - Eliezer Ben Yehuda
The revival of Hebrew as a modern spoken language is primarily the initiative of Eliezer Ben Yehuda. In our lesson today we learn about him from a conversation between Gali and her friend Yossi.
(review, feed)

Europe from its origins - Cultural shift in the High Middle Ages

The history vodcast Europe from its Origins just came out with a new chapter Cultural Shift 1200-1300 (feed). This chapter explains exactly as the tile indicates, the cultural shift that takes place through the 13th century. Europe urbanizes and its economy shifts from subsistence to a market economy. Simultaneously art and religion show changes and most remembered is the development in architecture from the Romanesque style to Gothic. 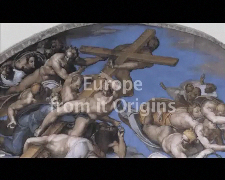 Gothic, by the way, as host Joseph Hogarty explains, is about as bad a misnomer as it could be. The high rising, pointy churches associated with this name are first developed in Paris at the Church of Saint-Denise (which by the way also figures in the book and TV Series Pillars of the Earth) and are rather French than German, let alone Gothic. On top of that, Gothic in those times had the meaning of barbaric - a far cry to the high-tech of the day.

What this all amounts to is not just to note how the high middle ages are different from the earlier, but Hogarty also seems to suggest that the burgeoning Renaissance is already enclosed in these developments and by virtue of that is much less of a revolutionary occurrence than it is usually portrayed as. Again Hogarty has given us a great piece of history podcast (video podcast) which professionally tells and explains history and in one fell swoop takes a courageous opinion in historiography.