A funny thing with letters

Around the corner of my office, right at the gas station, there is a new restaurant which serves oriental food. Huge signs are placed and they look like this: 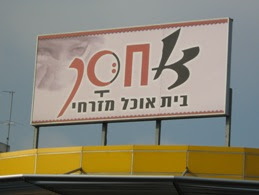 What does this say? I read: "jonk", but in fact it says "achsan" in Hebrew. I had the same experience when I had just arrived in Israel. The advertisements for the Israeli Lotto looked exactly like the logo of Hotel Ibis I knew from Europe. Below you can see how similar they are. Left is the Hebrew for Lotto and right is the Latin for Ibis.

When you are conditioned to read a certain script, you will always try to interpret a written piece in that script and can hardly see something else. My wife has the same problem with Latin script and will try to read it as if it were Hebrew. For example, she reads Pablo Picasso's signature as 'Sootnik' - see below.

Or is that 'Sitnoke'? I don't know, I only see Picasso.