There are several historical podcasts dedicated to biographies and I would like to take three out of the collection I know and point them out with their pros and cons.

First of all there is Learn Out Loud's Biography podcast. Each episode there is a new biography read out loud. The text is taken from sources in the public domain. This will usually mean old books, of which the rights have expired, but whose language is not always readily fit for podcast. It can be fascinating as in Tolstoy's biography about his youth, because Tolstoy's autobiographical notes were used. Also, the people listed are usually rather well known and interesting ones. So, taken the frequently old-fashioned text in account a good, if not terribly accessible podcast. 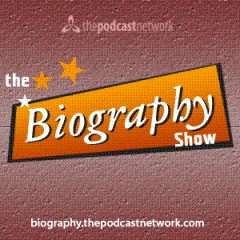 In terms of accessibility a much stronger cast is TPN's Biography Show. Also the figures chosen, are of the top shelve of famous and interesting people. The style is that of a loose conversation, or an interview if you will. Host Cameron Reilly will entice, or guide historian David Markham into explaining about the current hero. The latest show was talk on King Arthur what with Markham being sufficiently knowledgeable and prepared (which is not always the case) and with Cameron having an opposite view, there is some recipe for excitement. I do not see fully this come into effect, though, as Cameron sometimes neglects his role as an interviewer and is to eager to show his own views. Charming as the result is and entertaining on occasion, the audience is left with frequent loose ends and uneasy leaps from one speaker to the next.

Much more eloquently handled are the Oxford Biographies. The lesser point here being that invariably much lesser known and rather uninteresting persons from (British) history are discussed. Though on occasion it can hand some unexpected perspective or trivia. Such as the show on Lord Haw Haw, the Anglo-Saxon Nazi who was convicted to death for treason after the war, even if his British citizenship was illegally acquired and therefore not valid.