The Engines of Our Ingenuity podcast usually touches upon technology. It looked rather strange and out of style it would pay attention to the Indus Valley Civilization. Nevertheless, I was inclined irresistibly to listen. The Indus Valley Civ is one of my favorite mysteries. One of those blind spots in my history knowledge I feel I must learn more about.

How much can you learn from a three minute podcast? It is a surprise how much indeed. And this befits the profound quality of this podcast series: every issue takes less than five minutes and every issue takes up a new subject, but every issue Lienhard and the other hosts prove again they can condense a subject into those three, four minutes and pass on a whole lot of knowledge and stir up some profound questions.

The Indus Valley Civ remains a mystery of course, but the EOI podcast manages to point out in three minutes why this is such a huge mystery and why there could be some very crucial information hidden from us in the soils of Pakistan and India and in the script of the Harappan and Mohenjo Daro cultures, that has not been cracked until today. So far, the civ looks like an extinct branch of humanity, but who knows what we may unveil how indirectly it has touched us, through Mesopotamia, maybe, Africa, China, Egypt, Crete or the steppes of Asia.

Lectures do not always go well on podcast, but when the content is good enough, the drawbacks are sufficiently compensated for. The lectures UCSD puts in podcast come with additional disadvantages, that you have to take, in case you want to enjoy the quality of content. For one, get them quickly; as soon as the course is over, the podcasts will be discarded. Second: UCSD records the podcasts (apparently) automatically, which is maybe easy on the lecturer, but the system records if the lecturer doesn't speak, or starts and stops when programmed to do so, even if the lecturer operates in another window. You will find substantial pauses, sudden starts, empty podcasts and lengthy silences at the beginning and end of the podcast. So be it. 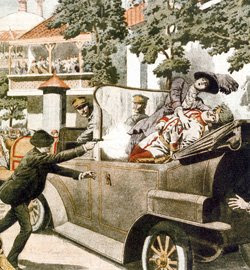 In spite of it all, I find myself persistently listening to the course Politics and Warfare by professor Victor Magagna (feed). This is a political science course which discusses various political theories of war and evaluates their strength in explaning how war starts, how it develops and what decides its outcome. Magagna distinguishes institutional theories on the one hand and structural, realist and neo-realist of the other. To put it very simply, institutional theories carry among their assumptions that war is basically never the best option whereas the other theories claim that there can be situations where war is the rational way to go.

I was drawn in, by the lengthy analysis of these theories adapted onto historic examples, most notably World War I (with the ever returning question who started it), but also the American War of Independence and the wars between the France of Louis XIV and the Dutch. This links in with the knowledge I acquired from history podcasts such as Berkeley's History 5, Stanford's The History of the International System, American History before 1870 and Historyzine. Because I felt familiar with the historic facts, I could get deeply engaged in the evaluation of political theory.

Relevant other posts:
History 5 on World War I,
The History of the International System,
A century of geopolitics - podcast review,
American History before 1870,
Historyzine.