Two podcasts, two witness reports on how civilians turn in their waste. The first is Distillations (feed); the witness brings an old TV to a special gathering point for discarding electronic equipment (in short eWaste) in New York City and is surprised to find hardly anybody there. So many people live in the metropolis and each day so many of them throw away old PCs, TVs, printers and such. The subtext is that all of this waste is dumped with regular garbage and that that is a bad thing. The show pays attention to heavy metals and their distinctive uses and qualities - it is a chemistry podcast after all. 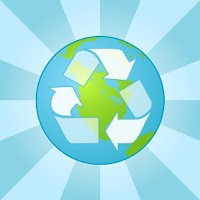 A central point, any which way you look at it, simply is: no matter goes lost, no matter is created anew. I would add: nature recycles and makes us do the same, even if we do not do so actively and consciously. The other podcast, Social Innovation Conversations (feed), delivers reports from the UK and Germany. Witnesses observe traffic jams around garbage collection; everybody seems to do it consciously. The podcast is a panel discussion that becomes rather heated. Recycling as a behavior is both attacked and propagated with a zeal that borders on the religious.

Here is a point being made: in Germany (and Britain is about to follow) public morality has developed a dedication for recycling that, with backing of law enforcement, requires of citizens to meticulously reduce their waste, sort it out, deliver it to the right address and what not. If upon scrutiny we could conclude that none of that time consuming activity is in actuality contributing to a better environment, than what is it? A new religion with its meaningless rituals? This critique is voiced by speaker Thomas Deichmann who goes on to not just reproach this latent puritanism, but continues to dismissively depict any form of civic involvement in waste management as a total waste of time and suggests to leave any possible problem entirely to engineers, to producers and large scale technological solutions. He even goes on to actually deny there are real problems of resources running out and pollution becoming irretrievably devastating.

His position is met with counter-critique by two female speakers named Julie Hill and Julia Hailes, which on account of sounding so similar are mixed up by the audience. The two of them disagree with Deichmann on all points. Civic waste management is not a waste of time, there is a serious problem of sustainability and the closing words sum it all up. They mention facts, which Deichmann fights with data about which one of the Julies exclaims indignantly: "That is just NOT true!"

A very interesting point comes up when the advantages of individual waste management are evaluated. The adherents emphasize in addition to the concrete contribution to the environment the 'feel good' factor. People reduce and separate their garbage and that renders the satisfaction of doing the right thing. Inherently this shows a point of agreement: the morality of recycling bears the qualities of religion. In addition I observed that the attackers of this religiousness have their own zeal, which struck me as coming out of belief (for example in human inventiveness and in historical progress) rather than dry rationality and evaluation of facts. I am left with the feeling I witnessed a church dogma discussion between Catholics and Protestants, in which the practical problems are forgotten in a competition of world views.

The way I see it, we are stuck with our waste and so we need to manage it, any which way you perceive it as a lethal problem or just a mild annoyance. Similarly, we are facing ever-growing cost of obtaining the raw materials for production and could consider addressing those costs by using the commodities in a more effective fashion regardless of the question whether the resources are actually running out or simply harder to come by. And also, there is enough data to agree the climate is warming and there is plenty pollution we commit and could crank down, regardless of the question whether that is going to deeply or just hardly compensate further global warming. We need not either completely rely on technological innovations or attempt to change behaving how we have been behaving, we need both. Practical problems ask practical solutions. Definitions of what the problem is and how deep it goes, as far as I am concerned, may be as practical and flexible as can be. Otherwise the discussions are at best semantic and at worst of the religious kind that only sets us apart.

Controversial subjects on Anne is a Man! Three upcoming posts in this blog will report on podcasts that contained very heated discussion and if not that touched on such a controversial subject, heated discussion simply must follow. And if you thought the death of Socrates could be one such subject and wouldn't result in a podcasted panel discussion with speakers doing nothing but heartily disagree, I can only wish you understand Dutch, for this is one that happened in a Dutch language podcast.

Another subject that came up and exposed wall to wall opinions, expressed with a zeal one would expect in debates on religion was the issue of waste management. Should your everyday individual citizen bear the responsibility for reducing and separating household garbage and if so, why? We'll hear advocates of recycling and hear ardent opponents of the very same.

The last subject expands on one that this blog is explicitly interested in. I keep reporting about the controversies around stem cell research in particular and bio-technology in general.In an upcoming post I'll report a philosophical discussion that takes these issues to the higher level of weighing human life. Can we even begin to think of asking the question whether life can be weighed, can have comparative value and not dive head first in controversy, before even contemplating the question itself, let alone answer it?

Subscribe in a reader Paste the link
http://feeds.feedburner.com/Anne_Is_A_Man
into the RSS reader of your preference.

You can let your preferences (I'd love get new podcast recommendations) know by commenting on the blog or sending mail to The Man Called Anne at: Anne Frid de Vries (in one word) AT yahoo DOT co DOT uk
Posted by Unknown at 06:50 0 comments