This blog is about the podcasts I have found and mostly about those I like. I review those podcasts, trying to give you some kind of an impression on what to expect. My hope is, you will find this blog to be a source for finding new podcasts to listen to. My main area of interest is history and this spills over into geography, social sciences, language, science, philosophy and religion.

There are, however, so many more valuable podcasts to be found and likely to be overlooked by me, either because I missed out on a major source of podcasts or because I dismissed it out of hand. I am the first to admit some really great podcasts that deserve to be mentioned here will not be reviewed and that is a pity. Whenever readers alert me to a podcast, I always take a second look and some listening time.

Let me know which podcast you want me to pay attention to and provided I can give some words of appraisal about them, they will certainly make it to the blog. You can communicate your podcast tips by leaving a comment anywhere in the blog or send me a mail, Anne Frid de Vries (in one word) AT yahoo DOT co DOT uk.

I am looking forward to your input.

Or the long, long list of podcasts reviewed.
Posted by Unknown at 23:35 21 comments

The library of Nineveh may have been larger than the great library of Alexandria, but it was destroyed in 612 BCE by the Medes and lay covered under the ruins, until it was finally discovered in the 1849 by an English adventurer, Layard. BBC's In Our Time discussed this find in last week's program. In this blog we have touched upon it on the side. 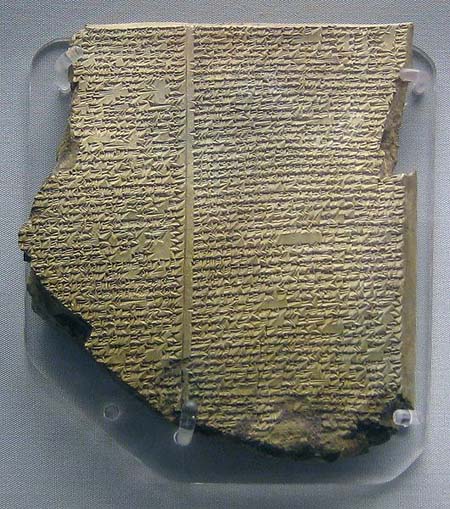 Professor Patrick Hunt, from various podcast at Stanford (a.o. Hannibal), wrote a book Ten Discoveries that Rewrote History in which the story of Layard's find is recounted. Until then, we knew very little about ancient Mesopotamia, and its script, the cuneiform, had not been deciphered yet. The library supplied such a large amount of new material that that could finally be established and then we proceeded to uncovering the roots of civilization, among others many stories known from the Bible.

In Our Time's panel also addresses these subjects and clarifies them as elegant and deep as usual. A peculiar fact is noted both by Hunt as well as In Our Time is that we have to be thankful the Medes destroyed the Library. The other enemy, the Babylonians would surely have looted the place, but the illiterate Medes were content merely to set it on fire. The fire destroyed a large portion of the contents, but not the clay tablets. In stead they were baked and thus preserved for many centuries, so that Layard could find them.

More In Our Time:
General review of In Our Time,
The Brain: A History,
Yeats, Enclosures and Materialism,
King Lear,
Ada Lovelace.

Nuts and bolts of empire

In many of the history podcasts, recently as well as over all time, a lot of attention is paid to empires, without digging too much into what constitutes an empire or rather what allows an authority to govern a wide stretched territory spanning many lands, religions and cultures, whether it is the British Empire, the Roman, Persian, Chinese or other. At the London School of Economics Professor Paul Kennedy held a lecture which addressed this technical issue. The lecture was podcast both by LSE as well as UChannel. Appropriately it got the title Nuts and bolts of empire.

All great empires have required a sophisticated logistical system, and a secure communications system to sustain themselves. In a world of endless challenges imperial ambitions soon collapse. This lecture will examine the hard, infrastructural underpinnings of the Roman, Spanish and British Empires, and reflect on how the USA compares in this regard.

Kennedy emphasizes tow aspects of empire, one is efficient infrastructure, the other healthy finances and proper auditing of the such. Empires cannot live without an efficient structure of transport and communications, lest the rulers can't know what goes on and properly, coherently respond. However, such large-scale structure is a costly enterprise and therefore the empire needs to make sure at all time it can sustain it in the long run. Kennedy argues that most empires fall under the weight of their expenses and the question whether the US should be regarded as an empire is evaded but nevertheless a warning is implied towards the current delicate finances of the state.

Berkeley's History 7b (US History : from civil war to present) deals somewhere halfway the lecture series with the Scopes Trial - a trial in Dayton Tennessee where it was attempted to keep a biology textbook out of the curriculum for it taught evolution. The trial took place in 1925, but has some significant differences and nuances from the discourse in the US today.

DIY scholar, a fellow blog containing many splendid podcast reviews comparable to Anne is a Man!, spent also a post on The Scopes Trial. It seems, for Americans the Scopes Trial is much more known than for a European such as myself. Consequently one very important nuance easily got lost and was dug up, not only in Berkeley's lecture, but also in a podcast by UCSD (the one DIY reviews). If one was intuitively tempted to side with the evolutionists in the trial and would condemn keeping the biology book from the curriculum, out of hand, you may be surprised.

One of the criticisms on the book is that it propagates eugenics. From the concepts of evolution, the leap is made to breeding and the suggestion inserted to apply to people as well. DIY gives a quote from the text book that is also read in Berkeley's lecture:

Parasitism and its Cost to Society. — Hundreds of families such as those described above exist today, spreading disease, immorality, and crime to all parts of this country. The cost to society of such families is very severe. Just as certain animals or plants become parasitic on other plants or animals, these families have become parasitic on society. They not only do harm to others by corrupting, stealing, or spreading disease, but they are actually protected and cared for by the state out of public money. Largely for them the poorhouse and the asylum exist. They take from society, but they give nothing in return. They are true parasites.

The Remedy. — If such people were lower animals, we would probably kill them off to prevent them from spreading. Humanity will not allow this, but we do have the remedy of separating the sexes in asylums or other places and in various ways preventing intermarriage and the possibilities of perpetuating such a low and degenerate race. Remedies of this sort have been tried successfully in Europe and are now meeting with some success in this country.

The jump from evolution to Eugenics (or Social Darwinism for that matter) is neither necessary nor self-evident, but historically has been easily made and it serves well to be aware of it. A very worthy podcast therefore.