In Our Time archive

How long has this been going on? I do not know since when, but this morning I suddenly noticed that the BBC has opened up the entire In Our Time archive for podcast.

I used to write that one should always download the In Our Time podcasts and keep for ever. The BBC used to keep only the last episode in the feed. In case one had not kept the episode, the only option to listen was to go to the on-line archive and listen while streaming. While that has become less and less of a bother with WiFi all around and capable smartphones, it still was a pity you had no option. All of this now belongs to the past; the archive is also available for download and one can lay ones hands on any chapter ever. 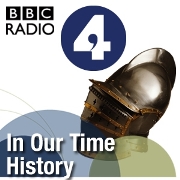 I immediately tried the history archive in order to find an issue from 2006, that I remembered as especially informative and the copy of which I had long lost: The Diet of Worms - which has nothing to do with food, in case you wondered. The Diet was an imperial assembly held in the German city of Worms and this program was about the one in 1522, during which Martin Luther had to defend his theology in public. If you ever needed 40 minutes to get a handle on Luther, the man and his ideas, this is the place to go.

Not only the Diet of Worms can be found in the feed, I saw the archive goes back as far as 1998 with promising titles such as Money, Byzantium, the Celts, the Aztecs, the East India Company, the Mughal Empire and on and on. A veritable treasure trove.

Melvyn Bragg and the Written World 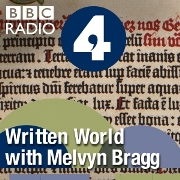 It is in the style of Tintin and the Secret of the Unicorn or Indiana Jones and the Temple of Doom that the BBC offers us Melvyn Bragg and the Written World. What showed up in the podcast feed of In Our Time (with Melvyn Bragg) and consequently disappeared, has now been published as an independent podcast: Written World with Melvyn Bragg (feed).

As I reported in the past days about this series, I got a comment from reader Richard Walker, to point out that this podcast had been spawned from In Our Time. Thanks Richard.
Posted by Unknown at 11:18 0 comments

Update to the break update for 2012

Did I write In Our Time started a miniseries The Written World? Well they did and for 24 hours the first two parts were in the feed. Even the third part was there for a couple of minutes, but now, the feed has been cleaned. The series exist, but not in podcast - what a shame. And sorry about sending you on a wild goose chase.

In case you really want to listen, check with In Our Time, The Written World and invoke the BBC iPlayer.
Posted by Unknown at 16:41 2 comments

Also in 2012 I will be on a prolonged break for the blog. 2011 has been a very busy year, simply too busy to engage in blogging. What has contributed to that, among others, is the fact that I have changed jobs twice. However, I have not stopped listening to podcasts and so let's have a couple of recommendations from my playlists.

The first is In Our Time, which has started a five part series about the human invention of writing and how writing and its innovations have had a fundamental impact on human history. Subscribe to In Our Time's feed and look for the episodes about The Written World.

The second is a sub-series in the China History Podcast which has been going on for 7 episodes already and is still running. Laszlo Montgomery is telling us the biography of Deng Xiaoping and this is the best introduction to recent Chinese history I have had in a long time. (feed)