The death of Marat - History by picture

Let's start this review with a picture: The Death of Marat, by David. Any podcast that pays ample attention to the French revolution is likely to make reference to this picture and if not to the picture then at least to the political murder that David envisaged with it. Marat was an influential figure during the reign of terror. Charlotte Corday felt he threatened the nation and decided to kill him. 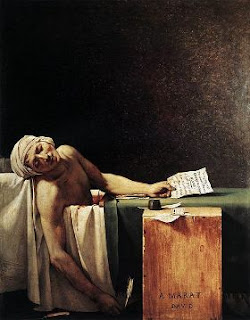 The story of the murder and the details of the painting are an excellent starting point for getting a grip on the phase of the Reign of Terror during the revolution. Not only the fundamental lecture podcasts discuss the episode and the painting - Berkeley's History 5 and UCLA's History 1c. Also in UCSD's art history class Formations of Modern Art, Professor William Bryson extensively discusses this work by David and its historic and political implications.

Not only the murder is political, also the painting is. David was a supporter of Marat and he went to great lengths in this depiction to make Marat into a martyr for the revolution and Corday into the reactionary ghost of all that was wrong with France. Surely, she is not in the painting, but one must realize that the story was widely known. Corday had with a false pretense gained entrance to Marat's bathroom. Marat spent most of his days in a bath, because of a skin condition. So there was nothing weird in him receiving her. There she stabbed him to death with a kitchen knife. What is left to see of her in the painting is the letter. Her letter, together with his are carefully constructed by David to achieve his effect. Listen to Bryson on UCSD (when the course is available) and the others to be filled in on the details.