Here are two podcast issues from the compiled archives of UChannel Podcast. Both address US internal political, societal and economic situation. Both speak of collapse. The first just of the Republican Party, the second of the US as a whole.

The Strange Death of Republican America: Chronicles of a Collapsing Party; Sydney Blumenthal claims the Republicans are losing ground and they have themselves to blame. The party has been taken over by its radicals and is scaring away the moderates. The atmosphere he projects is one of incompetence within the party. Sentiments rule and the leaders have been ignoring what is really important for their electorate. 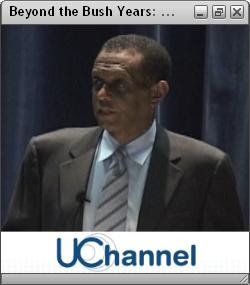 Beyond the Bush Years: the tough challenges facing the US in the early 21st century; also on the larger level, as Bob Herbert sees it. The sentiments ruled and the really important issues were ignored. Thus the US has been going down the drain. Its peak was around 1973 and generations ever since are having tougher and tougher lives. Though the American dream has been betrayed, he thinks it is not squandered - but people must wake up and take America in their hands.

What strikes me with these lectures are two things. One is how many people (not just these two speakers - see also The End of Hegemony) struggle with the loss of American dominance in the world. Trying to explain it and trying to see a trajectory for the future. Another is how deeply important in this election year are the questions of what kind of America the Americans want to have. Above all, there seems to be a crisis in American identity.

More UChannel:
New Map for the Pentagon,
Slavery and the Supply Chain,
Iran 2009,
The denials of yesterday,
Nuts and bolts of empire.