UC podcasts on the Energy Blues 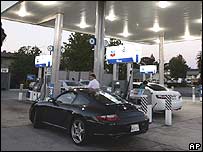 Are you worried about oil dependency? About global warming? I know I am. In the University Channel podcast I found two issues on the energy problems we have. See if I can get some insight on the politics and the economics of it. The first chapter was called Energy Security.

A couple of points before the cast got a tad too technical for me. It was explained how the current world economy is completely interdependent. As a consequence, Iran can hurt the US with its oil leverage, even though the US hasn't bought a drop of Iranian oil in the past twenty or thirty years. Iran can hurt the US market in Europe and anywhere else in the world. This means energy security does not mean one can at all aspire to independence. Thus the weight of countries such as Venezuela, Russia and Nigeria is quite high and thus also is their instability and non-conformity.

As said, it goes on to be rather technical or high level politics and economics. Good stuff though. The other podcast was called Energy Crisis and I shut that one down pretty soon because of the bad quality: the sound was low and only on the right channel. Probably great stuff as well, but you really have to be in to this kind of thing to sit it out.
Posted by Unknown at 08:00 0 comments