A podcast that was recommended to me and nearly got lost, because the reporter's mail ended up in my spam inbox was the podcast Paradigms. (feed) 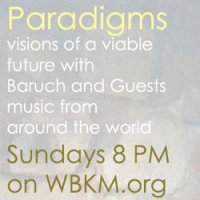 Baruch Zeichner produces a weekly thematic program in subjects of ecology and environmentalism that is offered as a podcast as well as broadcast on a Vermont radio station, WBKM. Apart from interviews and discussions, Baruch intersperses the segments with his own thoughts and with befitting music. Among the latest programs were issues about Nuclear Energy, pros and cons, social justice, native Americans a lot of music and more.

An issue that stuck out for me was the one about Water. Paradigms had several guests from all over the world to tell how drinking water is being turned into a commodity and about the serious effects this has on the population and the environment. The bottom-line is that an essential to life is commercialized. The drinking water is getting more expensive and the exploitation for profit is mostly badly affecting environment as well as the quality of the water. One of the messages to take away from this program, and I was surprised by that one, is to stop drinking (and buying) bottled water. I had gotten used to that in the past decade and Baruch has given me some good reasons to rethink my habits in this respect.
Posted by Unknown at 21:00 0 comments

I am not overly fond of podcasts that have a crew that is freely engaging in small talk among each other. It can be thrilling, but it is mostly boring and eavesdropping upon other people's conversations is not exactly my cup of tea. And so, I was not sure how to tackle a review of the reported podcast The Ice Podcast. (feed)

But then, the host of the podcast Chris Crookall was kind enough to point out to me that his podcast had also the occasional interview. He especially recommended the conversation with Matt Adams from Improv Everywhere. And rightfully so. In a very natural and accessible way we get to know the project of Improv Everywhere in which Matt Adams is part and about which he attempts to make documentaries (see Matt's web page). The idea is that we are all stuck in our routine perceptions of the world and the people of Improv Everywhere operate in the everyday world (mostly in New York city) and create scenes that force the bystanders to look at their surroundings freshly again. One of the discussed examples is a scene in which the agents of Improv Everywhere start singing in the food court - see video.