Globalization was started by Gengis Khan

UCSD's history course, taught by Matthew Herbst, MMW4 has progressed to lecture 9 and while this marks around the midterm and it should say we have been studying enough time to understand the framework of the course, there was something that made sense to me only by now. (feed)

It struck me as odd that the MMW cycle, which is aiming to go through the entire World History, divided into eras such, that MMW3 covered The end of antiquity into the Middle Ages, but not until the end of the Middle Ages. It went from around 100 AD to 1200. MMW 4 takes 1200 to 1750 and MMW 5 and 6 obviously will follow up after that. But why not take the Middle Ages in one chunk (500-1500) and then proceed with the Renaissance (1450 and up)? This question may reveal my Western bias and it certainly is an additional quality of MMW it takes on the history of the whole world, and therefore takes us frequently beyond the West and the Western perspective. 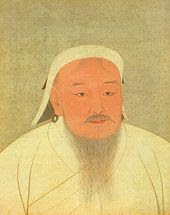 Only by the ninth lecture the division began to make sense. We leave MMW 3 and enter MMW 4 with a world that is dominated by the Muslim empire and by 1200 this changes fundamentally. Gengis Khan and his Mongols conquer nearly the whole Eurasian continent, break the powers of not only the Muslems, but also the Chinese. A profound change that the Mongols bring about is that for the first time in world history there is a direct connection between the East and the West. The Mongols rule communication and trade. This makes the world before and after 1200 fundamentally different. Maybe the Europeans did not begin to really feel this effect until the Renaissance. In any case this is one of the greatest assets of MMW in comparison with other history courses: it is able to constantly give original and challenging perspectives.