The genitals of Christ -- Anderson replies 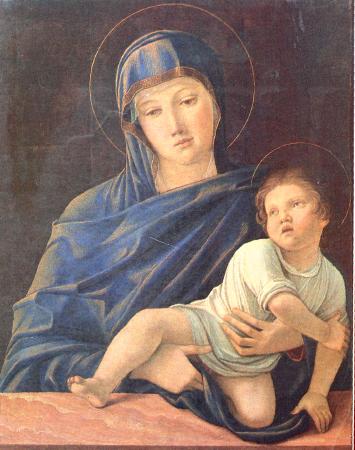 OK, so I thought maybe, these paintings that show Christ's genitals may want to deny Christ's circumcision. So, I figured I blog about it and drop an email to Professor Margaret Anderson (of the history 5 podcast). I do those things, without much research. The amazing thing about the modern internet era is that I got an immediate reply from Ms. Anderson herself:

Thanks so much, Anne, for your thoughtful comments! Good question -- but based on a false premise. (It was said of Herbert Spencer, who "thought big," that he considered the definition of a tragedy "a large theory brought down by a small fact.")

For Jesus was circumcised. (Luke 2: 21-39.) The "Feast of the Circumcision of Christ" is celebrated in the Eastern Orthodox (Russian, Greek, Armenian, Bulgarian Orthodox, etc. etc.) Anglican, & Lutheran liturgical calendars (and perhaps some of the later Protestant denominations too, for all I know), and among Roman Catholics it was, until the 1960s, a "Holy Day of Obligation" -- i.e., a day like Christmas, Easter, Ash Wednesday, and a very few more, when believers were obligated to attend mass. Vatican II, in order to make the Church more "user friendly," cut down on the number of obligations, like not eating meat on Fridays, and now the "Feast of the Circumcision," while still an important feast, is not one that you'd have to drop work to go to mass for. (Not that you'd have to drop work, at least in the West, since it is traditionally celebrated on January 1). A good part of Bach's Christmas Oratorium, which deals with the whole 12 days of Christmas, is devoted to the Feast of the Circumcision. And thus, by the time we get to Epiphany, the Greek word for the "showing forth" of Christ to the 3 wise men/Magi/kings, and thus -- symbolically, to the whole gentile world -- which was the main subject of these pictures of Christ's genitals, Christ had already been circumcised. And there are also Renaissance paintings of Christ's circumcision.

In the VERY early Church, there was a big debate among the disciples and apostles of Christ about whether a gentile who became a Christian, would have to become a Jew first, and get circumcised. (We're talking adult males here!). [The] apostles Peter, Paul, and Barnabus convinced the "Council of Jerusalem" (I.e., the very early Christians, meeting in Jerusalem, all of whom were of course Jewish) that circumcision would not be necessary, nor would it be required of gentile converts that they observe Jewish dietary laws. Here is the apostle James:

It is my judgment, therefore that we should not make it difficult for the Gentiles who are turning to God. Instead we should write to them, telling them to abstain from food polluted by idols, from sexual immorality, from the meat of strangled animals and from blood. For Moses has been preached in every city from the earliest times and is read in the synagogues on every Sabbath." (Acts 15:1-21 -- which is the 5th book of the new Testament, right after the 4 gospels.)

So if Christians weren't required to be circumcised, Why was the circumcision of Christ so important to the Church? You probably don't want to know all this, but it was important, not only to show that Christ's family were good Jews, who kept Jewish law, but because of the Christian tradition [of] Biblical exegesis. This tradition related the New Testament to the Old not only chronologically, but "typologically" -- or what we would call analogically or symbolically. Thus just as Jewish circumcision was a symbolic reminder of God's covenant with Abraham and all his descendants (the Jews), symbolizing Abraham's willingness to shed the blood of his son, Isaac, because God had demanded it, so too Christ's circumcision -- the first shedding of Jesus's blood -- symbolized "the new covenant" of God with Christians, foreshadowing God's eventual shedding of Jesus's blood for all the world, beyond the world of the People of Israel.

As for the importance of Christ's genitals for the Renaissance emphasis on the incarnation: had my History 5 lectures appeared in print, I would have of course footnoted my source for these reflections. Since they are oral (and, until last semester and the podcast, ephemeral), and since Berkeley undergrads would be bored to tears if I continually cited my sources, I left my source out.

It is the very stimulating work The Sexuality of Christ in Renaissance Art and Modern Oblivion. (University of Chicago Press, 2nd revised edition, 1997) by the art historian, Leo Steinberg (who, I assume, from his name, is Jewish). His book includes many of the paintings that I show my class to illustrate the point, although I found some additional paintings that support his argument myself.

The brilliant feminist medievalist, Carolyn Walker Bynum, who has specialized in gender issues and religion, published a very respectful critique of Steinberg's hypothesis when Steinberg's book first came out (the 1980s,I believe, or perhaps the early 90s). I can't remember what her arguments against Steinberg's interpretation were -- one of them was that emphasizing Jesus's maleness was not the same thing as emphasizing his "sexuality," only his gender -- but she went beyond that (maybe she said, in fact, that the wise men were pointing to his circumcision!). In any case, she convinced me that Steinberg's interpretation, though imaginative and brilliant, was wrong. (Her critique has been republished in one of her collections of articles). But the second edition of Steinberg's book, in 1997, has an appendix, entitled "Ad Bynum," which rebuts her arguments (he doesn't treat her nearly as respectfully as she treated him!)-- and I ended up being convinced by Steinberg all over again!

Obviously these are hypotheses. The artists themselves don't say WHY they are emphasizing Christ's genitals. But Steinberg's seemed a very plausible explanation for what looked like very odd goings-on in these pictures of the 3 Wise Men!

Thanks so much for your interest in History 5, Anne.
Yours,
Peggy Anderson

Wow, I am speechless. This is not just listening to podcasts, this is participating. It is not the first time I see podcast hosts go to great lengths addressing my reactions. Margaret Anderson (I am allowed to say Peggy, ha!) tops this experience. Have I said podcasts were great educational material? Have I said podcasts are better than talkradio? I haven't said it enough.
Posted by Unknown at 14:39 0 comments

The genitals of Christ -- History 5 Podcast

I will be writing much more of the latest edition of the History 5 podcast series which is carried by Professor Margaret Anderson. But in the fifth lecture about the common culture of early Renaissance Europe, she mentions something very new and very thought provoking: the fascination of the culture (at least of the visual arts) with the genitals of Jesus. This ranks from the little penis of baby Jesus, to the erection with which the risen Christ is depicted. 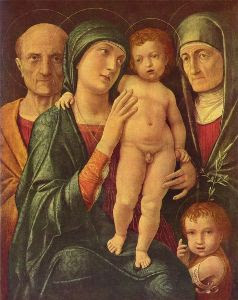 Many pictures show either the wise men examining the baby's genitals, or mother Mary lifting his robe in order to show, or even the child doing it himself. In addition, many of the pictures showing the dead or the resurrected Christ, depict him with an erection. Needless to say, in consecutive prudent eras, these details were painted over only to be rediscovered in recent restorations.

Professor Anderson's explanation is that this is allegorical and is intended to emphasize that Christ is human, a man of flesh and blood and as such kin to humanity. What this meant is, that on account of being related to men, it made sense for the Renaissance European that Jesus could have perished for their sins. This logic follows from the culture of having relatives be held responsible for debts. In this respect, had Christ been only divine, the death at the cross, could not be logically linked to the sins of humanity.

It is not for me to challenge Anderson's expertise, it just so happens another thought came to my mind. I think I'll ask her about it. (I did and she replied) When the genitals of baby Jesus are at stake, I thought, this may be connected to circumcision. The genitals are studied and portrayed either to make sure he is circumcised, or the opposite, he is not circumcised and if so, the whole meaning of these portraits is to remove Christ from his Jewish roots and as such dislodge Christianity from its Jewish origin.
The same could go for the mature genitals, though that would not explain why they have to be erect. Could that then, be some pagan element seeping in? Just some thoughts. What a podcast.

Perry DeAngelis - Don't Get Me started

The skeptics' guide to the universe podcast is regularly co-hosted by Perry DeAngelis. He is the most vocal of skeptics when it comes to badmouthing the true believers and the deceivers in paranormalland. Frequently this puts me off. But in edition 95 of the Guide, I could only agree with him.
In the section of listener's email, a YouTube video was being discussed. It allegedly showed an abnormal object on the surface of the moon, either man made or ... alien. It takes the panel valuable airtime to discuss this obvious hoax, prank or whatever kind of false thing it is, when finally Perry speaks up. Why are we even discussing this? Indeed, Perry, why are you?
For once I totally agree with Perry. In stead of going for the obvious stuff, the skeptics could go for the more intricate issues. Take on deceptions that many more people believe in. It sure makes for a more interesting podcast. Right on.
Posted by Unknown at 09:29 0 comments