The alleged racism of Albert Camus

Albert Camus became my idol, when at the age of 16-17 I read The Stranger for the first time (L’Étranger - I read it in French and in Dutch). On one of the recent issues of Entitled Opinions (feed) host Robert Harrison discussed this novel with Alice Kaplan, Professor of French at Yale University: Alice Kaplan on Albert Camus and The Stranger. And from the start the discussion gave a new interpretation of the racism in The Stranger.

Albert Camus as my idol represented the ultimate personal moralism, cleansed from common hypocrisy and ideological and religious pomposity. However, soon enough my personal saint was seriously challenged in his sainthood: I read an analysis of The Stranger by Conor Cruise O'Brien. O'Brien attempted to show that The Stranger was the product of French colonialist bourgeois cultural baggage. In the novel all the French characters have names and a personalized identity. Yet all the native Algerians are 'Arabs' and Meursaults murder of an 'Arab' is a mere vehicle to bring about an unconvincing show trial which is a vehicle to show Meursaults sanctity of the Camusian kind, yet indifferently ignores the cruelties towards the Arabs in the book to which Meursault shows no protest, judgment or even regret. In short, the Arabs are treated as the subhuman the French colonial was used to treat them and hence the writer and his book are marred by inherent racism. My hero was markedly tainted now; I would not want to give up on him and kept on reading and studying his work, yet O'Brien's harsh criticism was impossible to overlook. 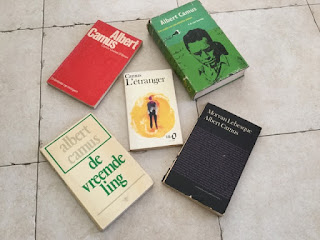 Alice Kaplan turns the issue completely around. She claims that Camus saw his society for what it was and as a court reporter was acutely aware that a case such as Meursault's would be treated as the murder of 'an Arab'. Hence, in her view, Camus' use of the French colonialist language and point of view is deliberate and entails among others a critical view on the inherent racism of his environment. I find it partly convincing for two reasons. For one it fits in with the naturalistic style of The Stranger which meticulously describes Meursault's world as it is, without making it grimmer or prettier and carefully abstaining from all judgment. Secondly, it fits in with Camus' independent moralism as expressed also in his later work. Listen and judge for yourself; as for me, as reluctant as I ever was to take in O'Brien's criticism I still feel that something holds.

The point where it holds connects with my personal experience, today, here in Israel, but also previously, when I still lived in The Netherlands. You see, it has always struck me that even the most politically correct people, those that reject racism wherever they see it and choose the side of the oppressed, they still talk of the oppressed in those generalizing terms. In the society where ethnic identity has such deep implications, even if you are totally against it, you are stuck with a language and public discourse that is drawn along the lines of ethnic categorization and profiling. It means that only if The Stranger would not be written in French and not be set in Algeria in the 1940's the novel would have a beginning of a chance to get away with this kind of inherent racism. It would no longer be The Stranger and would no longer be by Camus. So we will have to live with the criticism no matter what.