In honor of the Israeli Independence Day, I will review קטעים בהיסטוריה an Israeli history podcast, which came back after a long hiatus. Host Yuval Malchi came out with a double edition about the American war of independence. I am still hoping for an Israeli history podcast that will delve into Israeli, Zionist or Jewish history, but apparently, Yuval's major field of knowledge and interest must be US History, if one looks at the subjects he chooses for his podcast series. 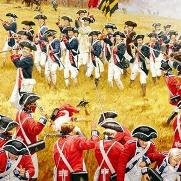 In respect to the previous editions, Yuval has improved on the audio quality and the way he condensed the story. He very effectively tells the full history of the American Independence, making use of audio effects to the right extent. I was very pleased to get two hours of history about this subject, for I knew not much in advance. I had considered a number of American podcasts, but they were more extensive and Yuval's depth was more fit to what I needed.

An additional strong point is that the podcast is in Hebrew. Even though this narrows the audience down considerably, but the Hebrew podcasting landscape is rather undeveloped and Yuval's work stands out as one of the very few history podcasts and the very best among those. Besides, I never can resist an Israeli touch in storytelling.