The New York Times has a number of podcasts, that I had been asked by Erno Mijland of the blog Alles Kan Altijd Beter to review again. So far, I must admit, I have not been tremendously impressed. And it is not the first time, I find that regular media, when engaging in podcasting come out rather poorly. However, the science podcast, is an exception to the better. 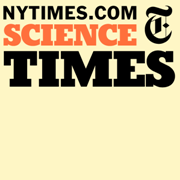 Science Times (feed) is a complete science rubric in podcast. It contains science news and one or two interviews about a science subject, interestingly this implies other than natural sciences. The interviews are done professionally and give a complete entry into the subject discussed. This is all the more commendable, since the podcast is relatively short: around 20 minutes. That makes it an excellent podcast to be informed about interesting subjects in science.

As mentioned above, this podcast covers more than just natural sciences. I have heard a couple of economics subjects that were handled pretty effectively as well. Furthermore, the health section deserves special mention. This is not only informative as far as medical science is concerned, it also has a tendency to talking about issues very pertinent to the consumer of health services. In short a valuable and good podcast.

Plato and Aristotle - In Our Time

BBC's In Our Time last Thursday came with an issue that had me very excited. In 1509 the painter Rafael painted the library of pope Julius II and produced a panel above the philosophy section. On the panel among other philosophers Plato and Aristotle are depicted and this painting serves as departure for In Our Time to discuss the most intriguing history of the reception of Aristotle and Plato in the West.

By 1509 Aristotle had been broadly received and thanks to Thomas of Aquino effectively incorporated into the Christian main stream of thinking. Plato was just rediscovered. New and complete Greek manuscripts reached the West and were translated. Plato rapidly came to be incorporated into Christianity as well and got to influence western thinking. This double influence of Aristotle and Plato continued also when philosophy became emancipated of Christian dogma.

Rafael's painting captures Plato pointing to the heavens and Aristotle pointing to the earth and this image, worth a thousand words, sums up how the two Greek giants are received. Plato as the abstractionist and Aristotle the observer of the natural world. Apart from the question whether this perception is correct and genuinely represents an opposition between the two, it tells of the way the two were perceived and continued to be so. And this is very revealing to the history of our thinking, which is exactly what In Our Time is all about. So in this it is at its best.

More In Our Time:
The Boxer Rebellion,
The library of Alexandria,
The Waste Land by T.S. Eliot,
The destruction of Carthage,
The brothers Grimm.

The podcast New Books In History is rapidly becoming a huge favorite of mine. There are few history podcasts with this level and NBIH is unique in its format of host Marshall Poe interviewing historians about their books. The result is a very vivid podcast with the best in their field to speak of their subject.

An outstanding sample was last week's interview with James Mann about his biography of Ronald Reagan, The Rebellion of Ronald Reagan. Who has ever associated Reagan with rebellion? Even though the facts as presented by Mann are, in my humble opinion, short of rebellion, but certainly show Reagan as a politician with his own views and one to follow them, also against the odds and against the party line. Reagan switched from being Democrat to Republican, but that is not all.

The most astounding fact, for me, was to find that Reagan was much less a belligerent president than perceived by me (and probably many others). He was especially averse of nuclear weapons and therefore, the amazing turn in the cold war, comes to stand in another light. It is not just the merit of Gorbachev, but also of Reagan, who was very receptive, I find out now, for the disarmament initiative. It didn't go smoothly though. Reagan and Gorbachev were very different characters and Reagan was not open to trust a communist, but nevertheless they managed to see eye to eye in the end. How this came about is told very lively by Mann. It makes the podcast apart from rivetingly interesting also very amusing.