Herod the Ambiguous - From Israelite To Jew

The podcast From Israelite to Jew in its historic series about the Jewish culture and ethnic identity, has reached the figure of Herod the Great.

Host Michael Satlow tells how Herod comes to the throne of Judea and comes to replace the last Hasmonean king. It is a story of war, intrigue, court politics and both bold and careful diplomacy towards the hegemony of the time Rome. This is no pleasant story and even as far as the sources are not supporting one single version, Herod's rise to power is no different of that from any ruler elsewhere or in different times. His greatness lie in the astuteness in war, diplomacy and politics.

Once in office, the ugliness continues and Herod, like so many other rulers, develops a paranoia. Greatness lies in his building projects. Most of these are controversial, as they are of Roman character. One of the problems with this is that the adornments contain, frequently, figurative art, which is taboo among the strict Jews. He makes good for this by restoring and extending the second Temple, the supporting wall of which still stands today and is known as the Western Wall, or Wailing Wall. Herod put Judea on the map, like the First Temple builder Solomon and his father David.

More FITJ:
Jewish varieties,
Jews in the Hasmonean era,
The Maccabee Uprising,
Hellenism,
Jews of the Persian Empire.
Posted by Unknown at 18:00 0 comments

Big in Japan - Podcasting is for the weak

Here is a conversational podcast, I wouldn't have tried, had I not known the guest on the show. פודקאסט זה לחלשים (Podcasting is for the weak - feed) did a show with Oren Ronen who has moved from Israel to Kyoto, Japan. Oren and I used to work for the same company and we have also joined on several social occasions.

I knew he moved to Japan from Facebook and Twitter, but did not know how he was doing. On Twitter he announced having been interviewed on the podcast (גדולים ביפן). What better chance for me to be updated? 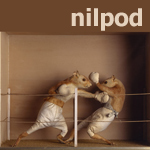 Conversational podcasts usually do not attract my liking. I have expressed this in the past about Real Talk, Nilpod (which is, as far as I can see, really outstanding in the genre), Masters of None and I simply turned down the request to review the Bouty Bouty SquadCast and am still not sure about 300 Bucks Damage. However, when someone talked that I knew and I was genuinely curious how he was doing, the experience turned out to be utterly different.

Why then the review? Very few of my readers will know Oren. Well, first of all, he tells in a very captivating style about Japan. He relates how he searched and found a room for rent. He tells about the anime TV series that are running and have caused upheaval among the fans. You get some feel of current day Japan. Second, there is something about Israeli poking conversation that is so much more sophisticated than English, Dutch or German I know.
Posted by Unknown at 06:00 0 comments