The medieval history of Ireland is heavily influenced by the Vikings. The new Irish History Podcast (feed) has already dedicated two different shows to the Vikings. Next to this podcast, I checked also what another Irish history podcast reported about Ireland and the Vikings: Irish Hedgerow history Lessons (feed) The first is an Irish podcast, the second is an American, Irish roots podcast. 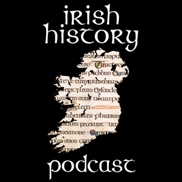 It is interesting to find out that Ireland was not just raiding ground for the Vikings. First of all it was a place for trade and eventually it was also a place for settlement. In addition to the era of fear and negative approach to the Vikings which made the Irish rather flee than seek contact, in the end there was a relation of influence. And Ireland became integrated in the wide world of Scandinavia.

Eventually the Irish also influenced the Norse and especially in the Christianization of the Scandinavians the Irish were instrumental.