The formula that works so well for the long show about Napoleon is repeated in TPN's (The Podcast Network) The Biography Show: Host Cameron Reilly presents the show and is accompanied by historian David Markham for the content. The natural mix of dialog, interview and conversation makes for a very effective formula. 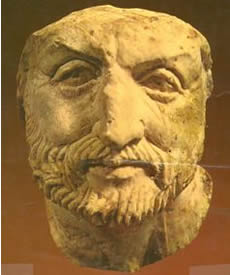 The difference will be, the Biography show will take a new character to talk about every episode and not dig into the life of (for example) Napoleon and meticulously follow his chronology. More superficial from the get go, but aptly justified by Markham. He uses the movies about Alexander the Great (the first to be discussed in the Biography show) as an example. Anybody who has some understanding of history and especially of the era and the person of Alexander can be aggravated about the omissions, mistakes and simplifications of the movies. However, it is the accessibility of the movie to the wide public, that allows history to be enclosed to a wide audience and is more likely to entice people to investigate some more, than a well-founded work of an academic.

As superficial quickies go, I think the biography podcast has little to be bashful about. I am not especially knowledgeable about Alexander, but I have seen the movie, have followed the Alexander podcast of Bob Packett and Dan Carlin as well as the History of the Ancient Mediterranean by Isabelle Pafford (Berkeley). Enough ground for comparison and the result is rather good. One example, Reilly and Markham point out the merits of Alexander's father Philip whose success in uniting Greece gave the excellent starting point for his son to become truly great. Now that was original, in stead of the more usual buffoon, Philip is awarded the greatness due to him. Very refreshing.

Thanks for the positive comments about our new show Anne! You are the man! :-)

You are most welcome, Cameron. I love your work. Keep it up.
When is the next biography due?