Just when I discovered the radio program and podcast Tapestry in which Mary Hines speaks with guests about issues of spirituality, an episode came up with Karen Armstrong. We have had Armstrong on the very similar program and podcast Speaking of Faith as well as at TED and UChannel Podcast. Especially now that she is active with her Charter For Compassion, Armstrong appears frequently in the media. Obviously also in podcasts. Tapestry is just the podcast for her to show up in. 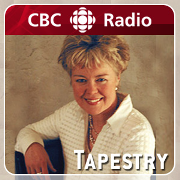 The Charter For Compassion is less subject of the conversation with Mary Hines. More so is Armstrong's latest book The Case for God. And just as the previous program I reviewed (with Terry Eagleton) the matter at hand is that of the confrontation between religion or spirituality and the rabid atheism and anti-religion of Richard Dawkins and Christopher Hitchens. As Eagleton did, Armstrong emphasizes how the attacks on religion from this atheist ideology is taking on the wrong category, the wrong language. Yet, Armstrong's explanation of religion is very different from Eagleton.

Karen Armstrong states religion is a call for action, but does so in terms that have me interpret this more as being an emphasis on experience. Of course this lies in the doing, but as Armstrong puts it, she reveals the very intense quest for meaning as elementary to religion. Her language is that of the singular activity which eventually, apart from doing the right thing, aims towards 'God' without knowing where it will end up. And this is the spirituality of hermits, yogis, whirling dervishes and monastics. It is true that this is religion, but it forgets the communal aspect of religion. That of shared outlook, shared ritual and established symbols. That communal, traditional religion is what bothers the atheists. And that communal and traditional religion frequently stands more in the way of the elated experience and moral action Armstrong describes than that it inspires to it.