Stanford has released the third podcast lecture series on the subject of Stem Cell Research and it is called: Replaceable You. This will be about regenerative medicine, which is more widely set up than the previous Stem Cells: Policy and Ethics and Straight talk about stem cell. This series consists of four two hour long lectures of which I have heard, so far, the first two. These lectures are given by a new lecturer: Professor Jill Helms. 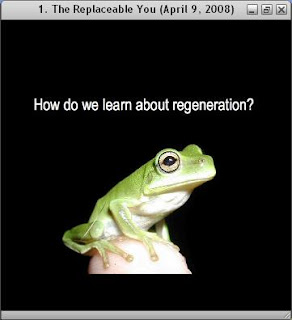 This series until this point does in one way more and in one way less than the previous. Helms gives, at least until half way, much less attention to ethical and legal issues and seems intent on continuing to do so. She happily tries to assume that her whole audience is in favor of Stem Cell Research and get the normative angle off the table. As if being in favor means you are not interested in addressing ethics. That is a deception

On the other hand, she very effectively explains in a much wider range what Stem Cell Research means and this is where the lecture series is significantly adding to where professor Christopher Scott in the previous series left off. Stem Cell Research and technology are part of the scheme of regenerative medicine. In stead of supplying the maligned body with prostheses, or leaving it to heal itself, which mostly gives useless scar tissue, the goal is to allow man to grow anew, like newts that grow back entire limbs in case they lose them.