The bi-lingual science and technology podcast Omega Tau made by Markus Völter and Nora Ludewig consists of excellent interviews with guests about their field of specialty. Depending on the guest's language, the podcast is done in either English or German. It is possible to subscribe to the entire podcast: Omega Tau podcast feed, but also to connect to feeds in either of the languages: Omega Tau in English and Omega Tau in German. 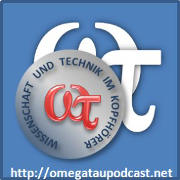 The latest show was in English and consisted of an interview with John Chatterton on deep wreck diving. Chatterton is a professional diver who has made a name with diving to shipwrecks at great depth. Markus Völter interviews him and discusses the intricacies of this trade. The result is an absolutely riveting expose about the extremely risky affair of diving really deep waters and entering the remains of vessels that have been lying there for ages. It is not only a talk of the technologies involved, the stringent safety measures, but also the mental resilience that is required.

Most of the conversation is about deep wreck diving in general, but there is ample mention of one of Chatterton's major achievements: the discovery in 1991 of the U-869 which was a German U-boat that went down before the coast of New Jersey in WW2. Chatterton wrote a book about this (Shadow Divers) which Markus read and made him invite Chatterton to the show. Well, he did not actually read it, but listened to it as an audio-book and on the show he reveals how you can acquire the audio-book, which he very much recommends - needless to say.

Thanks Anne, I appreciate very much your very nice review!