Here is a podcast with a weird name, The Ripple That Drowns, which contains the same lecture in three versions. You can hear the straightforward audio, which I did, or take the enhanced podcast or even the video of the lecture. And even though this lecture took place some time in 2007, it is still very interesting and relevant. (feed) 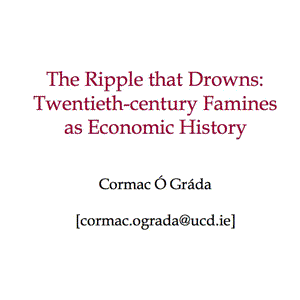 Professor Cormac O'Grada from the University College of Dublin spoke about new evidence on the causes of 1959-61 Chinese famine as well as the Bengal famine of 1943-44. These two famines, in his mind stand out for the sheer size of the disaster.

In general famines in the twentieth century, he argues, are not that great. There are fewer famines than in other eras and if they are there there are fewer excess deaths. This is on account of smaller scale and also on account of modern insight in disease. The problem with famine in earlier times, as to the excess deaths, was not so much starvation, but rather the ensuing diseases. During famine, more people die of typhus and such rather than sheer undernourishment. Especially famines in regions where there is peace, have become very small if they happen at all.

Exceptional, though, are the Chinese and the Bengal famines. In both cases, political incentive to ignore and downplay the famine by the authorities turn out to greatly contribute to the extent. In Bengal it is the British war effort in World War 2 and in China it is the Great Leap Forward.
Posted by Unknown at 06:00