The new highlight on my playlist is When Diplomacy Fails (WDF in short blog, feed). There are many reasons why I stopped blogging, but a refreshing history podcast such as WDF was sorely missing and had me feeling there was nothing new to write about. Now that it exists and has come to fruition (it has been around for four years and I am still catching up), it is certainly one of the reasons I came back to history podcast reviewing. Fortunately there are more - I have some 12 podcast review drafts in the pipeline! 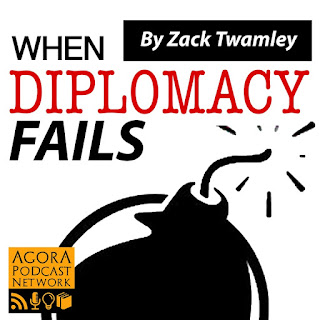 WDF episodes come in three types. There are the single subject episodes. In these the host Zack Twamley tackles a subject and finishes dealing with it. Just as the others these are very good: well studied and well prepared. Although they are more superficial than the second type I will come to in the next paragraph, they are well written, well presented and give just what you need (perhaps with the exception of the episode about The First Italo-Ethiopian War, but that is the only one off I have encountered so far). In fact, if you are new to this podcast, as I was a couple of months ago, these are the ones to start with. You might even want to consider to line them up chronologically and let Zack work you to the second type of episodes he has for you in store: the specials. You can take the 19th century subjects leading up to the First World War and then take on the brilliant, massive, fascinating and surprising special about the 1914 July Crisis. Or you could take the 15th and 16th century episodes and line them up to the special about the Thirty Years War.

So there you have it: the second type: Zack's specials, where he has a subject spread out over several episodes. These are the tremendously thorough and well-studied podcasts. The ones that stick out for me are the Thirty Years War - a monument in the podcasting landscape, and the July Crisis of 1914. Did Gavrilo Princip cause the First World War? Is Wilhelm the second to blame? We have had more podcasts revising the standard take that Germany is to blame. Zack however does this to his own surprise. He had made a single subject episode on the First World War and fed us this frame of mind, but then during his special honestly come to another conclusion and tell us about it. You must hear it.

Then there is the third kind of episode: TALK episodes. In these podcasts, Zack is joined by his friend Sean and they discuss the latest podcast subject in a free-flowing conversation. Obviously these episodes are much more casual and light which leads Zack to be a bit apologetic about them. He really should not be; among conversational podcasts, many of which derail in insufferable rambling or otherwise in unnaturally scripted unconvincing pseudo-dialogue, WDF's Talk episodes stand out as truly interesting. I am still not sure what is the right balance between banter and disciplined discussion that makes for a good conversation podcast, but when Zack and Sean hit the spot, they surely show the way.

Taken all the three types together in one podcast, makes WDF a new standard and shining example in history podcasts. Fortunately, again, he is not alone, a whole wave of new history podcasts with similar qualities has sprung up and revived the podcasting genre. Thanks Zack.

UPDATE 8 May 2016: I noticed that I used an outdated link for the podcast and repaired that
Posted by Unknown at 20:00