Podcasting has yet to break through 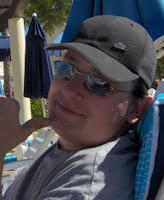 Dutchman Maurice Zondag became a podcaster in 2005 after having seen Adam Curry on Dutch television (2 Vandaag) explain about 'audio blogging'. Maurice had already tried his hand at blogging but felt spoken word and added music would give a much more direct way to his public. When I interview him he explains: "With sound you can carry so much more emotion, at least that is true for me. The written voice is cold, but when I speak the tones come into play. What is more, I have always been interested in music. I always listened a lot and I played in a couple of bands, so the possibility to add music to my blogging was a very essential improvement."

When he looks back at his early productions he sometimes cringes on the lack of professionalism. "I still had so much to learn. I have no background in radio and television and with my musical career I had done some audio recording, but recording speech, especially with Skype, a whole other technical world comes into play." These days Zondag carries at least 5 podcasts which he produces or participates in, among others Sunday Sundown and F1cast. "I still have a lot to learn, but the quality has much improved and I pride myself in producing better podcasts than many others including main stream media in the Netherlands."

Main stream media have yet to pick up on podcasting and currently there is a reverse tendency: they are backing out a little bit. Some podcasts from radio stations were discontinued, frozen or altered because of huge royalty payments claimed by the representative BUMA/Stemra and NVPI. This is a subject that enrages Zondag. "The royalty system is skewed and outdated. They are not actually benefiting the artists and are taxing the wrong way. For example, if I want to make a promotional podcast for my own band, I have to pay royalties to BUMA/Stemra, over my own music!" This has brought Zondag to focus on podsafe music and his podcast Sunday Sundown is intended to deliver the best easy listening music from the podsafe realm. As more and more artists will understand they rake in their revenues in concerts and accessory sales, they will go over and declare their work podsafe. "It will be a matter of time for this royalty system to become totally obsolete."


Old media do not get it, neither does the audience

What keeps podcasting back is not just main stream media (afraid of the expenses in royalties), but also the public at large. "In fact, podcasts offer the audience advantages they do not have with regular radio, in that you can listen when you like, but the wider audience is so used to radio, podcast has not been discovered yet." I ask him whether he thinks this will happen soon as people, by wider use of the internet, raise the standard to selecting content tailored to their own preferences and needs. "I don't know," he responds, "I am not so sure people want to find their own content. Most are just happy to turn on their middle-of-the-road radio station and have the content picked for them." I suggest it should be technically possible to have an internet site choose podcasts for the listener, based on profile, preferences, previous listening and ratings. "Sure, technically it is all there. And developments, also in TV, go in that direction, but podcasting is still a matter of a small in-crowd. The makers are the listeners. Main stream media should take podcasting ahead. They have the knowledge, the experience and the means, but they don't. Not only TV and radio or newspapers hardly do any podcasting, the major news site Nu.nl has even stopped the podcast they had."

"Recently," he relates, "in ICT update (a podcast by Mark Baars in which Maurice Zondag participates - AIAM) we had a news scoop, but no matter how hard we tried to push regular media, nobody would pick up on the story. There is still a lot of work to do." What work this is, is something he shows in his Sunday Sundown. Listeners can order a CD with the best music played on the podcast. "It is a CD anyone can order for free at the website of the show at
www.sundaysundown.com. I did this because I wanted to do something for my listeners, and the artists that supported my program as well. In this way I can get their music to the fans of the show, onto their CD rack, instead of staying on some playlist on iTunes or an mp3 player. People can give it away to friends and family, so it will also get some attention outside the podcast scene, to people that might have never heard about podcasting or independent music. Having my name and the name of the show on there is a bonus too." In other words podcasts need to be promoted and taken beyond the current in-crowd.

His F1cast is something he does, 'for the fun of it'. It is a Dutch language podcast about auto sports. "You know what fun it is, after you have seen the race, to chat about it with a friend. Others do that about soccer, I do this about Formula 1 and A1 Grand Prix." This actually shows another strong point of podcast. No TV sports program in the Netherlands could pay so much attention to this branch of sports, but with podcasting, a much wider audience can be reached at a much lower expense which allows for all sorts of niche content that otherwise would not exist. "But it is hard to get the word out. Very very few people know this exists. When I visit a car race and offer my card, nobody knows what I am talking about." In the end new media are to stay. Technically it can offer all regular radio and TV can offer, at a lower cost and with the added advantages of the user choosing when, where and how to listen and what to listen to. Eventually podcasting can be fitted in a viable business model.