Diversity and sensitivities in Christianity

For the fourth post on a row, I will touch upon religion. It just so happened that yesterday's post triggered quite some discussion. It serves to take a look at the comments and follow the discussion around what is Catholic and what not. This digs into the history of Christianity and its many divisions (and the ensuing sensitivities). For that subject, I have many podcasts to direct you to. Let us start with one that I found recently. 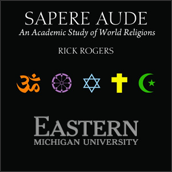 The podcast series from Eastern Michigan University by Rick Rogers: World Religions (History 100) gives a general and easy to access introduction in the five major religions (feed). For the purpose of yesterday's discussion, and since I had come around those chapters anyway, I listened to the the six episodes about Christianity. Each is about 20 minutes long and one by one they set you up very neatly into Christian history, doctrine, church and holidays. Actually, I found the section about Christianity the best I have heard so far (with only Islam to go). You sense that this is Professor Rogers' own field of research.

Other podcasts that I can warmly recommend for getting up to date about the history of Christianity and its divisions are:
Phil Harland's Religions of the Ancient Mediterranean
UCSD's MMW3 The Medieval Heritage (Charles Chamberlain, Matthew Herbst) which runs this semester as well (with a.o. David Jordan).
Yale's New Testament History and Literature (Dale Martin)
Stanford's Historical Jesus (Thomas Sheehan)
LSE's Christianity's past and futures (Diarmaid MacCulloch)
Posted by Unknown at 12:21

Actually what I saw was not so much "sensitivities" as striving for factual accuracy on a complicated subject. Which, as far as I can tell, was both warranted and achieved its goal. We now all have a better understanding.