A new course in UC Berkeley's podcast (and vodcast) directories is Letters and Science by Professor Richard Muller. (audio feed, video feed) Over the semesters this course has been delivered frequently and always under another title; Physics 10 and Descriptive Physics among others. The oldest and in many ways still the best title, however, is Physics for Future Presidents. The intention for Muller is to inform the wider audience about physics facts and data that are required in order to be able to have an informed opinion and partake in public debate on issues such as global warming. 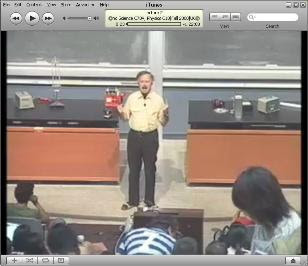 Not only does Muller greatly succeed in delivering the subject, including hugely complicated stuff such as quantum physics, but also he manages to be highly entertaining and provocative. Therefore, after one lecture, I can only recommend the series once more.

For the Fall 2008, the course has also been updated. It will still be very familiar to those who have followed it before, but at the same time, Muller promises to pay more attention than ever to global warming. I find the lectures sufficiently accessible also in audio, but it makes sense Berkeley also filmed Muller's performance, so that you can keep track of the visuals and actually see the various experiments and demonstrations he performs.