Thanks to a post at Open Culture I was alerted to a new podcast at the BBC: A History of the World in 100 Objects. Neil MacGregor, Director of the British Museum, narrates 100 programmes that retell humanity's history through the objects we have made. (feed) 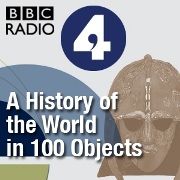 Once again I am struck by the magnitude of the agricultural revolution. In a more general sense the series shows how humans in shaping objects, they shaped their world and have continuously been changing their condition. Add to that the element of narrative which can be shaped in a thousand ways, and by each way, shape our history and hence our condition as well. In the art of shaping a story, this BBC series does a fantastic job.

More BBC programs:
In Our Time,
A short History of Ireland,
Thinking Allowed,
Analysis,
A story of India.
Posted by Unknown at 10:12

This is a truly wonderful series but I'm not sure that it really achieves the object of presenting a history of the world. It So far, it's given us some fascinating insights into a few far off moments and places in history but it feels too scattered to give any coherent view of world history.

My experience is really different. I do feel it has made a successful connection between the episodes and brought across a general tale of development from early hunter gatherers and tool users to more sophisticated, cultured, art developers and eventually farmers with an emerging sense of society.
But it is as with all stories: they present the dots and it depends upon the listener to draw the lines between the dots and discern the overall picture.